Enter one or more words or numbers and click "Search".

Your search results will show matches from:

Searches are not case sensitive. Searching for san francisco is the same as San Francisco.

The Options drop-down lets you narrow your search

Carleton Watkins (1829-1916) is perhaps the most famous early western photographer. He found international fame for his award winning photographs of Yosemite, San Francisco, the Pacific coast and subjects throughout the western states. Watkins is best known for his mammoth plate photographs but actually published the majority of his work as stereoviews. They represent a comprehensive look into California and the West from the 1860s through the 1890s. 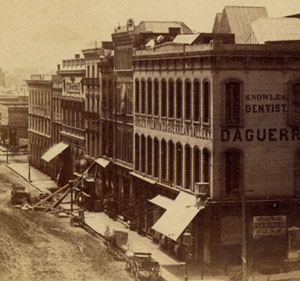 Carleton Watkins was born in Oneonta, New York on November 11, 1829, the eldest of eight children. Lured by the opportunities of the California gold rush, he traveled to California with fellow Oneontan Collis Huntington (later to become one of the "Big Four" owners of the Central Pacific Railroad).   Watkins was employed by Huntington in Sacramento deliverying supplies to the mining operations. After the great Sacramento city fire of November 2-3, 1852 he set out on his own to be a professional photographer.

Between 1852 and 1854 Watkins worked as the "outdoor man" or camera operator for several established photographers including Robert Vance who had a gallery at the corner of Sacramento and Montgomery Streets, near George Murray's Bookstore where Watkins worked as a clerk.1 Watkins said to biographer Charles Turrell around 1900 "My first paper photograph was a view over Portsmounth Square". Watkins's work as a photographer between 1854 and 1858 is still under study.

By 1858 Watkins was working on his own, taking on a number of photographic commissions for publishers and individuals, such as James M. Hutching who used the photographs as a source for engravings in his "Illustrated California Magazine". He produced photographs for evidence in courts of law and also documented the mining estate of John Fremont and his wife Jessie Benton Fremont in Mariposa County and their estate at Black Point.

In July of 1861 Watkins traveled to Yosemite equipped with a mammoth-plate camera, which used 18 by 22 inch glass plate negatives, and a stereoscopic camera.   He returned with 30 mammoth plate and dozens of stereoscopic negatives (see stereographs numbered 1 through 100). These photographs and later Yosemite images, established him as a master of landscape photography.   The prints helped influence the U.S. Congress to pass legislation protecting Yosemite Valley. Watkins may have traveled to Yosemite in 1858-59 and the first 100 stereographs could include a combination of the two trips. By 1863 Watkins was selling stereoviews of Yosemite, the New Almaden mining region, the Mendocino coast as well as views of San Francisco.

Watkins issued his early stereoviews on glass mounts and on card mounts with handwritten titles. These have come to be known as manuscript or hand-signed Watkins views. Examples of Watkins glass views can be seen here. Watkins numbered his stereoviews starting first with the Yosemite series (Mendocino views were initially numbered as a separate series and were later renumbered as part of thegeneral numbering scheme). After about 1863, stereoviews were mounted on yellow cards with printed labels. These were later replaced with orange card stock and printed labels.

Watkins won many awards during his career, starting in 1865 with an award for "Mountain Views" at the Mechanics' Institute Exhibition in San Francisco. In 1867 Watkins won a medal for landscape photographs at the Paris International Exposition and the following year started printing his stereoviews with an acknowledgment of the medal on the back of the card.

After problems with Eastern firms pirating his images, Watkins began copyrighted his work in 1867. Stereoviews were printed with copyright dates on the mount with imprinted titles and numbers. 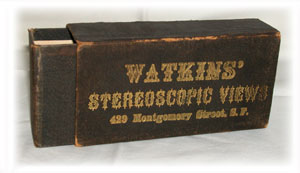 Stereoviews were typically priced and sold by the dozen. Pictured at right is one of Watkins imprinted boxes used for stereoviews.   This box holds two dozen views. Boxes used for one dozen views have also been seen. 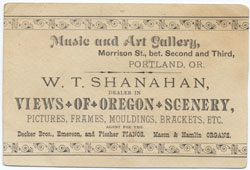 In 1867, Watkins also traveled to Oregon and photographed Portland and the Columbia River area for the Oregon Steam Ship Navigation Company.   The following year he exhibited 50 mammoth prints at Shanahan's Art Gallery in Portland. 2

Watkins continued to travel widely, making photographic excursions to Northern California, Yosemite and the Sierra Nevada mountains as well as Utah. Watkins photo wagon, which served as a portable darkroom in the field, displayed advertising for his San Francsico studio.

In 1871 Watkins moved his studio to number 22-26 Montgomery Street. Located near one of his largest competitors, Thomas Houseworth, & Co, he named the establishment the "Yosemite Art Gallery". In the mid-1870s both photographers had studios in the first block of Montgomery Street.   The location was convenient to tourists staying just across the street at the Lick House, and to the Palace Hotel at the end of the block.

While Watkins won acclaim for his artistic efforts he was not considered a good businessman and, during the financial crisis of 1875, lost his studio and negatives to creditor J. J. Cook. Cook, along with photographer I. W. Taber, took over the Yosemite Art Gallery. Taber began marketing Watkins stereoviews under the I. W. Taber label, although retaining Watkins original view numbers and titles.

In spite of this devastating setback, Watkins began to rebuild his inventory of negatives by revisiting locations he photographed in the 1860's.   He called these views "Watkins New Series" and started numbering at 3000. The series begins with views of Yosemite, just as his original series started.

Inscription in a book of Christmas poems given to
Carleton's wife Frances in 1878.

In 1879, Carleton Watkins, aged fifty, married Frances Sneade, age twenty-two. 4   At right is an inscription from a book of Christmas poems Carleton gave to Frances in 1878.

By the mid-1890's Watkins deteriorating eyesight and other health problems impacted his ability to work. The earthquake of 1906 destroyed Watkins studio along with the negatives of his life's work. Watkins died on June 23, 1916 at the age of eighty-seven.

Although the negatives were lost, Watkins prints exist today in many private and institutional collections. The creation of the Carletonwatkins.org website is an effort to reassemble a large portion of Watkins stereoviews and to allow us to understand and enjoy his vision of the West during the second half of the nineteenth century.

The contents of CarletonWatkins.org website are subject to Conditions of Use — Copyright © 2003-2021 Carletonwatkins.org